Is Afterpay Another Debt Trap? In a recent analysis of Debt Rescue data, we have identified there has been a 271% increase in clients entering new Debt Agreements, who have accumulated an Afterpay debt over the last 6 months compared to be previous 6 months*. Match this with Afterpay’s latest financial results, and we see that they received a profit increase of 365% from late fees and penalties over the same time period. With the steep rise of social media and online shopping at its peak, it is no wonder that Afterpay has taken a dramatic leap forward. Our data analysis also shows that 78% of our clients with an Afterpay debt in their Debt Agreement are under 35. This appears to be a worrying trend, due to the increased online shopping experiences of today. 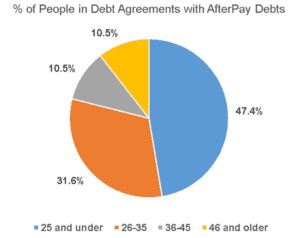 We help people of all ages who are struggling with debt.  But to see this amount of young people entering Debt Agreements with a debt to Afterpay is unsettling.  Afterpay’s controversial “There’s nothing to Pay” slogan specifically targets Millennial shoppers and their desire for instant gratification.  Nick Molnar, Afterpay's co-founder,  said it was “aligned with core millennial values and lifestyle preferences”. Millennials are the largest group of Australians entering into Debt Agreements.

Most people have heard of Afterpay, especially those who enjoy internet shopping. What started as an online “buy now, pay later” payment scheme, it is now appearing next to checkouts in your favourite stores.  To further lure in consumers, Afterpay is interest-free, and the approval process is VERY straightforward. Afterpay is a modern layby payment system, however, the consumer receives the product when they have made the first payment. They are then required to make equal repayments each fortnight for the next 8 weeks.

Thousands of businesses Australia-wide, both online and instore, are now offering Afterpay. But it is not just for fashion and electrical goods like many people think. Even budget airline Jetstar is now offering Afterpay, and Dreamworld has joined the hype. Offering experiences on a “buy now, pay later” proviso, has also given a false sense of spontaneity and wealth to many consumers. Now, even the thought of saving up for a wedding is blurred, as wedding planners, dressmakers, and hair and makeup gurus sign up to the trend.

What is the Limit for Afterpay?

Consumers could be approved of up to $1,000 to spend, but 25% of that must be paid upfront, if you are a first-time applicant. The remainder must be paid over the next 3 fortnights. The usual initial approval amount is $500 when linked to a debit card.

How does Afterpay Make Money?

The late fees charged by Afterpay equate to an initial $10 late fee, followed by $7 if the payment remains unpaid a week later. This is where the spiral begins, as each fortnight you must pay the agreed amount to avoid penalties adding up. Aside from charging late fees and penalties to consumers, Afterpay also charge merchants for their services. 4-6% per transaction, plus a flat fee of 30 cents, to be precise.

Recent reports have shown Afterpay to have made $28.4 million in consumer late fees, in the 2017-18 financial year alone. The year before, it was $6 million. This whopping rise is so significant that the Australian Securities and Investments Commission (ASIC) is supporting the government’s plan to broaden lending regulations to include “buy now, pay later” schemes. It is usual for a business to seek profit from their consumers, but this huge increase is directly relative to the number of people spiralling into unmanageable debt.

Does Afterpay Run Credit Checks and Will it Affect Your Credit Score?

Yes and no. Afterpay does not run credit checks when you initially sign up. However, they do reserve the right to order your credit report and conduct further repayment capability checks. Regarding your credit score, if you fail to meet repayment requirements Afterpay will promptly report you to a third party collection agency. At this stage, you can expect a default or “black mark” on your credit report. This can make it difficult to secure credit in the future. In essence, you could be sacrificing your ability to obtain a home mortgage, for a dress or TV.

Can I be Declined for Afterpay?

You will be declined from further orders with Afterpay if you do not keep up with your repayments. This is also a sign that you could be spiralling into debt, and may be struggling with other repayments you owe.

At Debt Rescue, we want to protect and save you from debt traps like Afterpay. If your money is not managed responsibly you could end up with huge financial struggles. If you are struggling with debt, please call one of our friendly Case Managers on 1800 560 579. We can rescue you from debt!